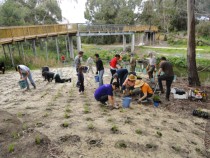 were ground storey. Nine percent were semi aquatics and aquatic species.
Clustered Wallaby Grass (Austrodanthonia racemosa), Weeping Grass (Microlaena stipoides) and Common Tussock Grass (Poa labillardieri) were the top three species planted with over 4,000 individual plants each. They accounted for over half of the total plants. The first two small grasses are hardy colonising plants that have been planted beside pathways and to consolidate existing sites with mature trees. The larger Tussock Grass creates attractive swathes of Tussock grassland in more open areas beside creeks such as alongside Merri Creek between Rushall Station and Queens Pde in North Fizroy and at Edwardes Lake in Reservoir.