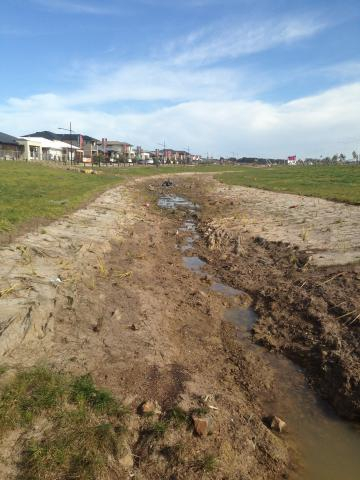 The failure of a constructed waterway near Donnybrook Rd Mickelham was highlighted last year by Merri Creek Management Committee (MCMC) in our  Muddy Merri Troubles Report. Behind the scenes, Melbourne Water have been working to rectify the problems exposed by this waterway. They recently provided a welcome update to MCMC on progress on this matter.

Melbourne Water have also acknowledged the widespread occurrence of problematic soils in the Kalkallo Creek sub-catchment of the upper Merri (west of the Hume Highway between Donnybrook Rd and Beveridge). They will require all future developers to address the issue of erosive/dispersive soils earlier in the planning/design process to avoid similar problems occurring.

Read more below for full comments from Melbourne Water and an outline of the rectification options.

Melbourne Water has met with the developer and consultant to discuss a number of rectification options including:

It is expected that rework will occur in late winter-early spring 2019, with re-planting to occur immediately after the civil works.

Melbourne Water notes that the erosive/dispersive soil is widespread amongst the Kalkallo catchment, with the issue being prominent in areas where the integrity of the surface is being disturbed. As such, Melbourne Water will be requiring all future developers to address these issues earlier in the planning/design process."