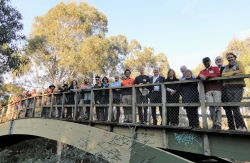 Merri Creek Management Committee (MCMC) celebrated its 30th Anniversary with an afternoon walking tour along Merri Creek on 23rd May 2019.

First stop was near CERES in Brunswick East, where the MCMC President, Ann McGregor, talked about some of the first plantings along Merri Creek in the 1970s. Then people walked downstream along the Northcote side of the Merri where Geoff Mabett talked about the  transformative works of the Northern Waterways Group in creating Merri Park in the late 1980s. The group was photographed on the footbridge between Merri Park and Sumner Park.

They then returned along the Brunswick side and heard from Ann McGregor about how part of the former Whelan's Tip came into public ownership, now Kirkdale Park. Last stop was the litter trap in Phillips Reserve where former MCMC Manager, Rod McLellan, explained MCMC's role in the design and installation of the trap, undertaken by the- MCMC employee, Nick Curmi. Take the web version of the tour here.

After the walk, the celebrations continued in a meeting room at CERES, where people mingled and heard reminisces about MCMC from former Brunswick Councillor, Robert Dorning, and Friends of Merri Creek representatives Bruce McGregor and David Redfearn.  President, Ann McGregor, gave a run through of MCMC's early objectives - remarkably similar to  its current objectives - and of MCMC's key achievements. In a few short hours the history, struggles and achievements of MCMC were well communicated. 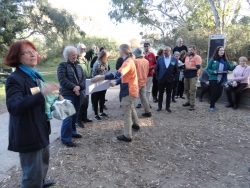 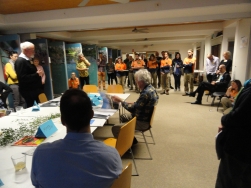 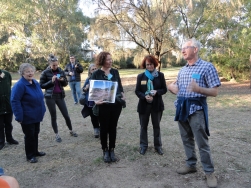