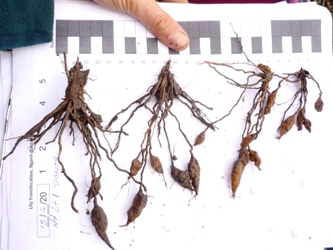 At the time of colonisation, the harvesting of roots for food on plains in Victoria by aboriginal people was extensive. Records of early observers indicate that a widespread custom for traditional custodians in southern Australia was to replant some pieces of foodplants. This would have ensured ongoing availability of these species.

In 2010, Merri Creek Management Committee (MCMC) sought a partnership with the Wurundjeri Tribe Land Cultural Heritage Council Inc.(WTLCHC) to begin to re-develop and update the knowledge needed to apply digging in a remnant grassland for both ecological and cultural renewal purposes.

A small trial was conducted to test the ability of the Chocolate Lily, Arthropodium strictum, growing in a remnant Volcanic Plains Grassland to survive and have its population increased through digging, dividing and replanting. Twenty plants were treated in this way in 2012.

Results were disappointing with almost the same number of plants surviving at the end of the trial as were lifted at the beginning. However, several important observations were made that could lead to better outcomes in further trials in the future.

Survival of replanted divisions appeared to be influenced by combinations of weather, age and structure of the divided material, degree of cultivation of the receiving sites and the impact of foraging by Eastern Grey Kangaroos and by introduced rats. These observations suggested directions for further investigations. Trials under nursery conditions are recommended to identify the importance of some of the variables before further field trials with wild plants are attempted.

Digging plants in natural grassland location is a powerful experience for re-connecting to country and culture. Aunty Alice Kolasa described her experience, ‘I was excited because I was doing what my ancestors did and I could imagine my ancestors digging up plants in this same way. It was particularly exciting to see the bulbs emerge from the soil. I didn’t expect the roots to be so heavy.’

Division of tubers is also a potential tool for increasing rarer tuberous plants such as the Plains Yam Daisy. The associated soil disturbance may be incorporated into new management techniques to promote germination of certain threatened wildflowers.

Despite a disappointing first result, we have deeply appreciated the shared experiences on our journey so far towards re-learning local Traditional Ecological Knowledge.

This project was funded through Victorian Department of Environment and Primary Industries and the Australian Government’s Caring for our Country.