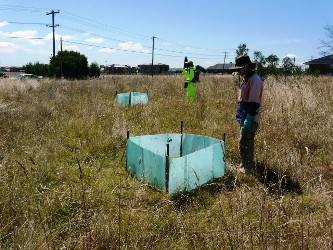 Grassland wildflowers sustain the diversity of invertebrates and in turn, a whole web of life.

An MCMC project treads a fine line attempting to re-establish wildflower diversity using an ecological process that also has potential to hasten grassland degradation. After initial setbacks, a reliable technique for restoring floral diversity may be emerging from this collaboration between Traditional owners, MCMC and researchers.

Soil disturbance was once common in the native grassland ecosystems along Merri Creek that we are attempting to restore. For thousands of years, soil disturbance occurred as a result of digging for edible roots by the Wurundjeri, this area’s Traditional custodians. Research at local universities has suggested that reintroducing soil disturbance might help provide the conditions many wildflower species need to establish. However, in today’s grassland remnants, soil disturbance also helps weeds invade so is actively prevented.

How can soil disturbance be reintroduced without causing further harm to the grasslands?

More than twenty metre-square patches of Ngarri-djarrang grassland were treated to create gaps amongst the grasses and then the soil churned to see if this would allow seed of wildflowers to establish. The beautiful native daisy, Lemon Beauty Heads, Calocephalus citreus, was our ‘guinea-pig’. Lemon Beauty-heads have died out at Ngarri-djarrang but remains common at some other local grasslands. Two different levels of weed control are being compared. Cages over some of the patches were installed to identify whether activity from the resident mob of kangaroos would cause problems.

How is it going?

Our first attempt to establish seedlings in 2012 failed. We planted in spring and the tiny seedlings soon shrivelled up in the extremely dry spring and summer of 2012. We learnt that seed and plots must be prepared well in advance and winter rainfall is crucial to seedling establishment.

A second round of seeding in autumn 2013 is showing good results. At the two month mark, 600 seedlings have established, from an estimated 2100 seeds, a very high percentage. Numerous paw prints on un-caged plots suggest why cage plots have slightly better results. So far, only a moderate amount of extra time has been needed to address the extra weeds that have resulted from disturbance.

Careful preparation ensured several native plant species have been retained within the disturbed patches. Germination by other wildflowers like Blue-devil has also been observed. Exciting! Our plots are beginning to show greater floral diversity compared with their original grass-dominated state.

Further monitoring and reporting on milestones such as maturity, flowering and seeding are planned. If successful, the process may eventually become a routine method for fostering further generations of wildflowers. It has been a great thrill for researchers at local universities to see their research being applied in the field and for MCMC and Wurundjeri crew to share this learning experience.

This project was funded the Australian Government’s Caring for our Country.

You can read the complete report in MCMC’s Publication/Information section in the Ecological restoration/parkland management reports here.