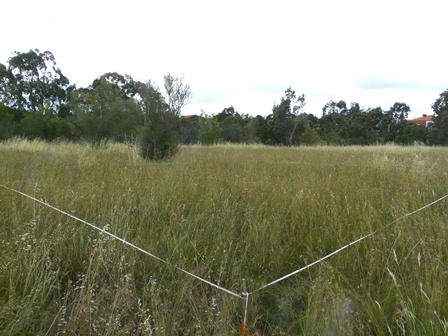 A Caring for Our Country Urban Waterways grant of 2012 to 2013 provided the funds to set up permanent vegetation quadrats at two project sites.

Vegetation 'quadrat' analysis is a preferred technique for detecting fine-scale vegetation change.  The number of species in a set area of ground is listed and the percentage of ground within that area that each species covers is estimated.  Repeated surveys of an identical area allow us to track the changes in different species, including the overall coverage of exotic versus indigenous plants, and the cover of priority weeds.

Simple right?  No! This is a very exacting technique, especially in a complex grassland with many similar looking species.

For the project, Merri Creek Management Committee staff established six permanent vegetation quadrats, three at Rushwood Drive Reserve in Craigieburn next to Merri Creek, and three at Bababi Djinanang Grassland Reserve in Fawkner. Most of the quadrat locations were chosen to include some sites where intensive vegetation management work was imminent, with the intention of documenting some of the resulting quality changes.

Data from 10mx10m quadrats was analysed to produce estimates of cover of indigenous versus exotic plants, cover of priority weeds and numbers of species of the different plants.

Grassland vegetation is highly dynamic due to seasonal variation and due to the cyclic variation of relatively high frequency ecological burns that are applied to emulate traditional burning practices of Aboriginal peoples.    There was a relatively short interval between the set up of the quadrats and final assessment (November 2012 to July 2013 for Rushwood Drive and October 2012 to December 2013 for Ngarri-djarrang).  At the sites where intensive vegetation management work had been undertaken, there was a clear reduction in the cover of priority weeds. This is attributable to ecological burning and targeted weed control.  Other expected improvements in vegetation quality resulting from management actions did not yet show up in the % cover data.

The permanent quadrat locations provide an ongoing benefit for these sites, providing a baseline against which ongoing management actions can be evaluated.

You can read a report, including photopoints for the project here.