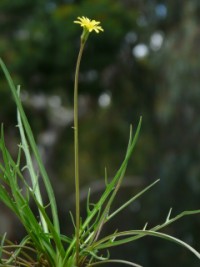 The daisy survived at a few sites in the Merri Creek valley north of Melbourne, but were they thriving or dwindling? The daisy is difficult to see among the many similar grassland plants. Seed was easy to grow in captivity but by the late 1990s, Merri Creek Management Committee (MCMC) had repeatedly attempted and failed to re-establish the species in protected grassland reserves. We needed lost knowledge about the life cycle of this plant in its natural grassland environment. 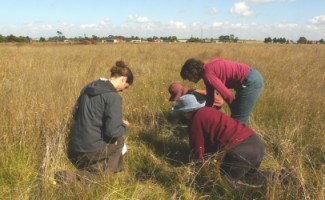 In 2010, with the assistance of the Victorian National Parks Association (VNPA), Wurundjeri Tribe (traditional owners of this area), Hume City Council and volunteers, MCMC began to mark and record the growth of a small population at Kalkallo Common Grassland in the mid-Merri catchment. Since 2011 a five-year Communities for Nature Grant has allowed MCMC to investigate and manage threats to this species at most of the known sites in the Merri Creek valley.

From 30 plants tagged in 2010, MCMC’s crew and community volunteers have now identified over 200 plants at the Kalkallo site. This probably reflects both better search techniques as well as a positive response to management applied to the site. In 2014, almost all of the original marked plants survive, indicating that wild growing plants may have an indefinite lifespan, in contrast with the often short-lived cultivated plants.

Knowledge gained about microhabitat, timing of flowering and response to fire have  helped us re-discover two populations at Thomastown and Wallan where the species hadn’t been reported for some years. Our better understanding of microhabitat has also helped us to identify potential re-introduction sites.

A seed orchard developed in conjunction with the Victorian Indigenous Nurseries Cooperative in 2011 has provided a reliable and genetically diverse source of seed for reintroduction trials. Reintroductions in succeeding years have begun to yield a small but increasing number of seedlings, as well as important information on germination and establishment.

In July 2014 the Plains Yam Daisy vanished again, this time in the botanical literature! Some recent references 'lumped' all Australian Microseris species as a single species. However, the Victorian Herbarium remain of the opinion there are three distinct species in Victoria including Microseris scapigera, the skinny flowered ‘Plains Yam Daisy’. Botanists will probably continue to disagree on Yam Daisy classification – they have been doing so for nearly two hundred years. Regardless, the distinctive Yam Daisy of the basalt plains warrants our continued efforts to maintain its survival into the future.

We are still waiting to see if our most recent reintroduction efforts will bear fruit (or roots!). Our ultimate goal is to identify reliable techniques to foster and re-establish abundant populations in grassland reserves. Community participation in surveys and monitoring are playing a valuable role in this unfolding story. Thanks go to the VNPA’s NatureWatch program and all our volunteers. We hope to see you in the field again in 2015!

You can listen to a MP3 recording of the program about the Yam Daisy Surveys that was broadcast on the 3CR Lost in Science Show on 19 June 2014 here (4MB file).

Our thanks to Neville Walsh of the Victorian Herbarium for advice on this article.