Has thirty years of restoration of the Merri Creek made a difference? Woodland birds think so!  Friends of Merri Creek quarterly birdwatch data give us a wildlife ‘census’ at the Merri Creek woodlands in Fawkner and Reservoir. These woodland have expanded by thirty hectares in thirty years. Up to 33 woodland birds now use the tree canopy, understorey shrubs, native groundcover and sparse leaf-litter strewn ground.

Bird’s eye views: twenty-six years apart (see photos below)
A 1989 aerial photo of Merri Creek’s open space in Fawkner and Reservoir shows 60 hectares of sunburnt slashed pasture grass and ovals. Dark patches show where dense thickets of Gorse, Blackberry, Fennel, Boxthorn and Willow were slowly smothering the last handfuls of Redgums and wattles. Kangaroo Grass reddens the few hectares of remaining native grassland near the end of Jukes Road.
But things were changing. A spotty pattern shows where the giant 1988 Bicentennial project had established new plantings in shiny black plastic weedmat.
A drone photo from 2016 shows a very different landscape. The grassland patches are carefully preserved and half the open space is shaggy with the canopies of Redgum, Yellow Box, Drooping Sheoke and wattles. Over thirty years, thirty hectares of woodland has been created by MCMC, Councils, Melbourne Water and the community.

Who’s home?
Friends of Merri Creek birdwatches since 2009 have given us a ‘census’ of birdlife that has moved into this thirty hectare ‘wildlife’ housing estate. Of the 89 bird species recorded, 33 might be considered ‘woodland birds’ that require tree canopy, understorey shrubs, native groundcover and sparse leaf-litter strewn ground. Early in the restoration effort, a 1993 survey found only seven 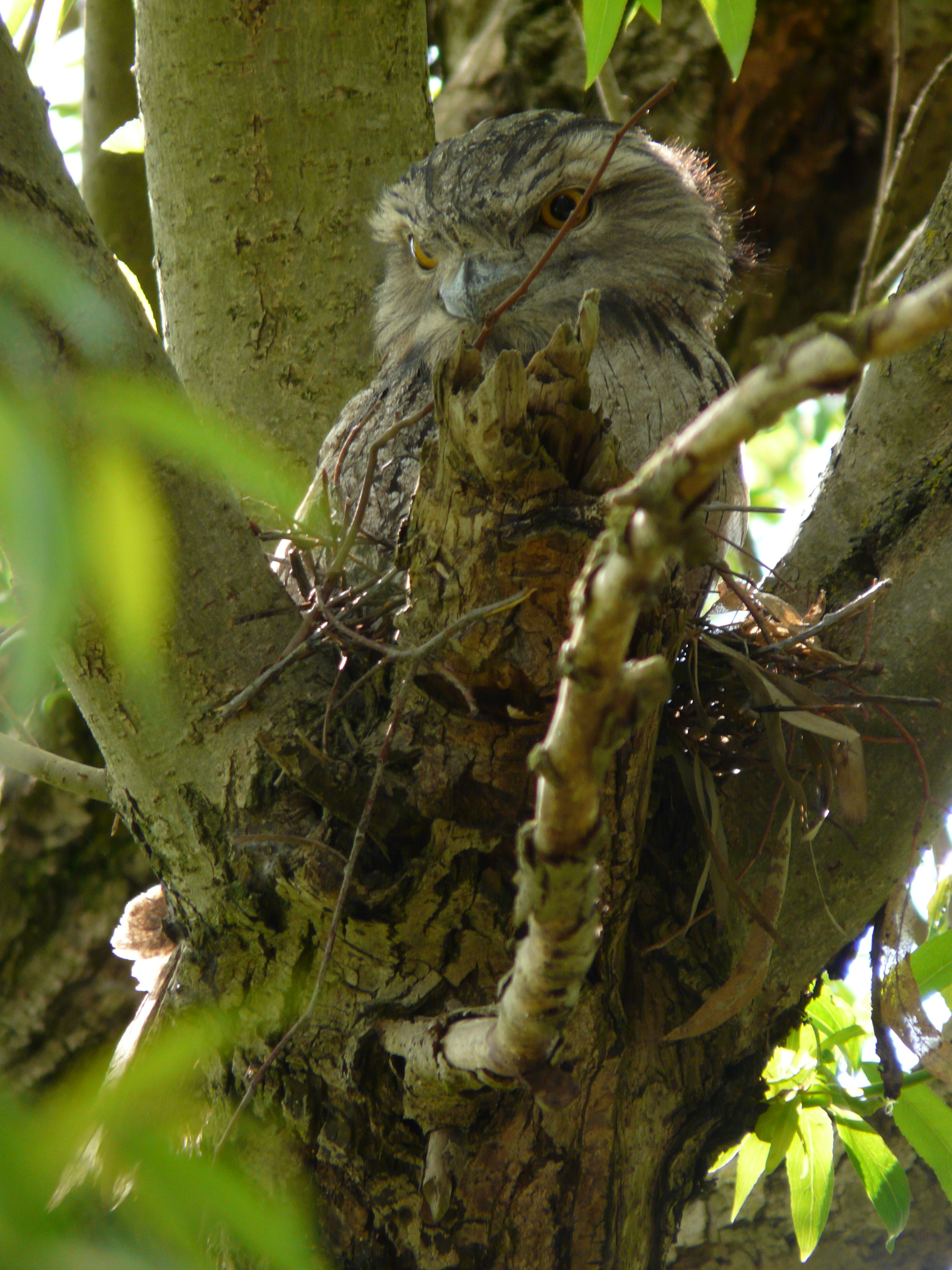 ‘woodland birds’ along the Merri between Mahoneys Road and Murray Road.

Not all recorded species are well established; thirteen previously recorded woodland birds were not recorded in the 2015-2017 surveys. Of these, some like the Pacific Koel and Western Gerygone are considered vagrant or extremely rare in Melbourne so the absence of records is not surprising. Some recent summer surveys have been missed due to lack of leader availability, reducing the opportunities for detecting summer migrants. Tree hollow nesters like the Sacred Kingfisher (another summer migrant) and Striated Pardalote are unlikely to linger until hollows are available. The majority of the trees in this area are less than thirty years old and tree hollows generally form in trees older than one hundred years.

The absence of the Grey Shrike-thrush from recent surveys perhaps indicates that this sedentary species is not yet firmly established in Moomba Park and nearby woodlands. The bird’s habitat, leaf-litter below trees, is expanding; however its ground feeding habit makes it vulnerable to cat predation.
In the last three years a further hectare of woodland habitat has been created through MCMC’s Habitat Heroes project funded by the Helen Macpherson Smith Trust. This has added to the opportunities for the woodland specialist bird species.

How good can it get?

What can woodland birds look forward to in future years? As the plantings mature the amount of rough bark on trunks will increase, expanding hunting grounds for Shrike-tits and Tree-creepers. The extent of leaf litter, branches and logs will foster fungi and invertebrates; food for robins. Eventually tree hollows will form homes for pardalotes and kingfishers as well as parrots, owls and possums. In time, mistletoes may establish in the maturing canopy - or even be deliberately reintroduced. The berries, nectar and leaves of parasitic mistletoes are a critical resource for many Australian woodland birds. Then, the cheerful ‘swee-switt!’ call of the Mistletoe Bird will rejoin the expanding bird chorus in our suburbs.
As habitat extent and quality thresholds are reached, current rarities may become common and other woodland birds like Crested Shrike-tit, Striated Thornbill and White-naped Honeyeater might also discover this new woodland haven.
Birds are sensitive indicators of habitat change. The Friends of Merri Creek hold quarterly birdw surveys at various sites along the creek.

Below: Aerial photos of Fawkner and Reservoir in 2016 (Left) and 1989 (Right) showing the newly established woodlands outlined in white. The black plastic patches of the Bicentennial plantings are visible in the 1989 photo (Right). In order to see the whole photo, just place the cursor on one of the directional arrows (< >) and move the mouse in the direction indicated. 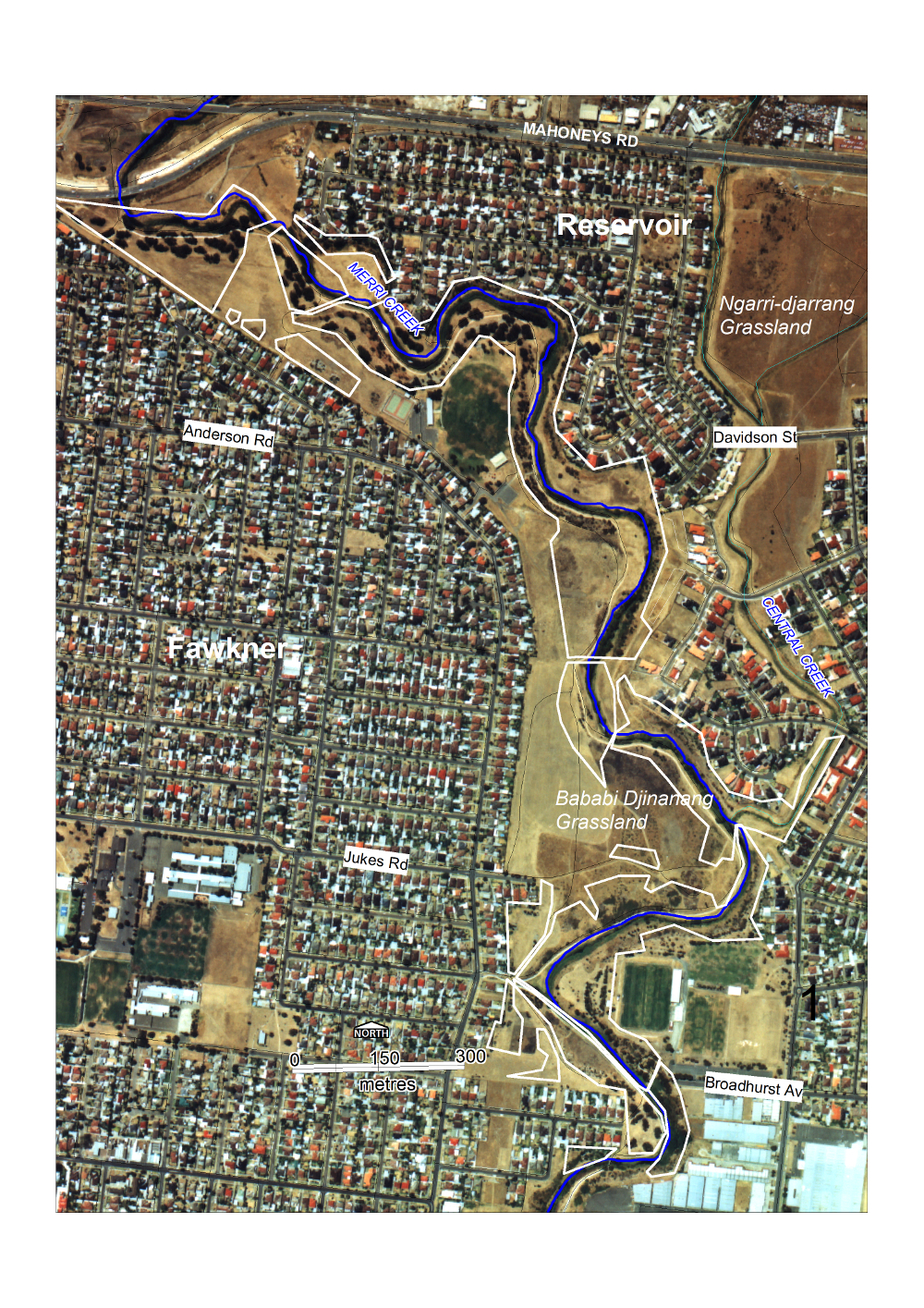 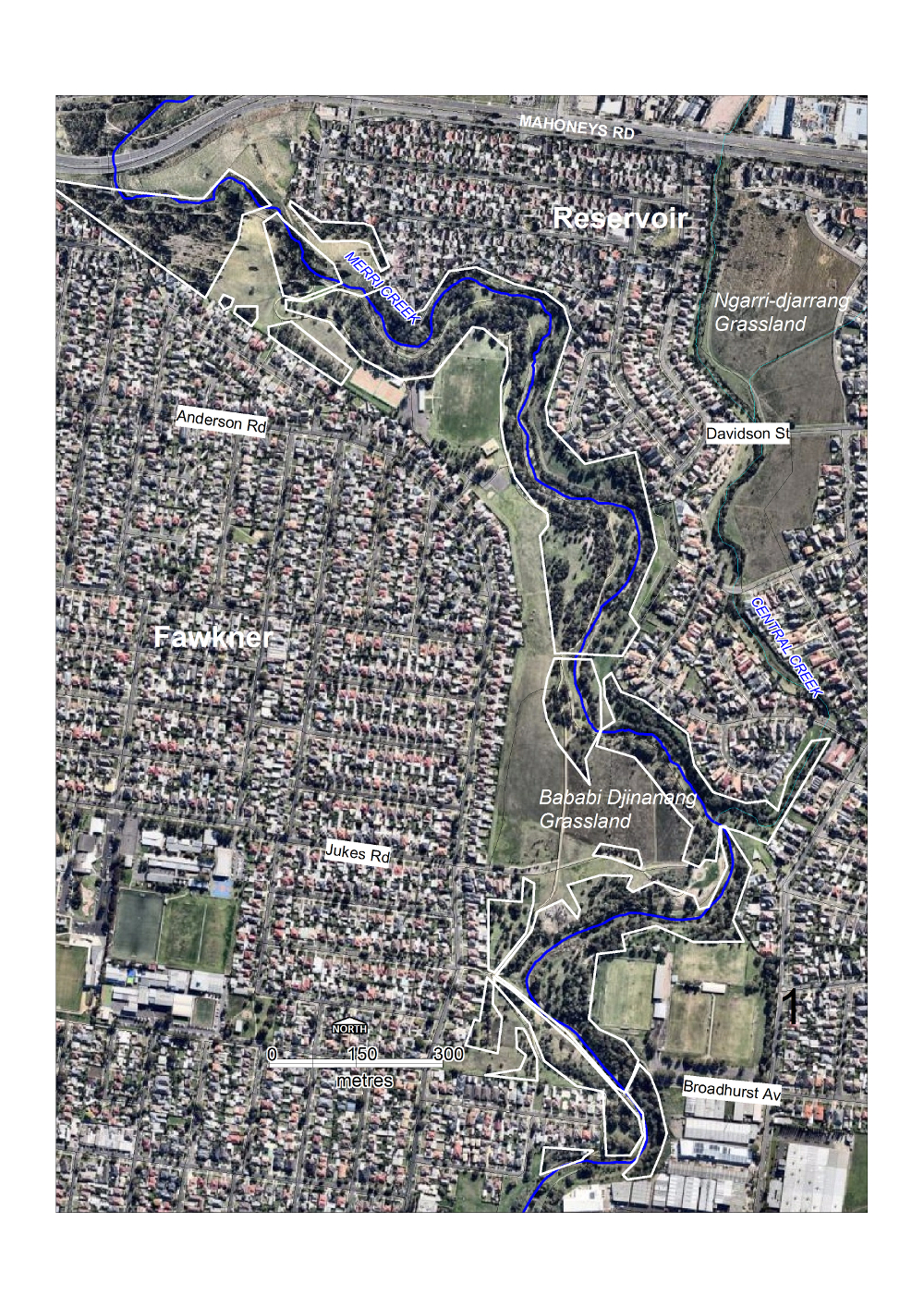