The South African Weed Orchid was first recorded in the Merri Creek valley in 2013. A dozen plants were promptly removed. Unfortunately this speedy removal wasn’t quick enough and the Weed Orchid has spread through nine hectares of state-significant grasslands at Ngarri-djarrang Grassland in Reservoir.

Each Weed Orchid flower can produce tens of thousands of tiny seeds which are easily spread on the wind, on vehicles, tools and clothing, threatening native grasslands around Melbourne. Its fleshy leaves and tubers compete with indigenous wildflowers like orchids, lilies and other herbs for prime space between the grass tussocks. 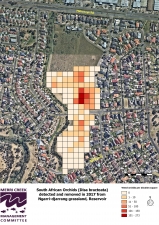 In 2018, the following actions are planned: