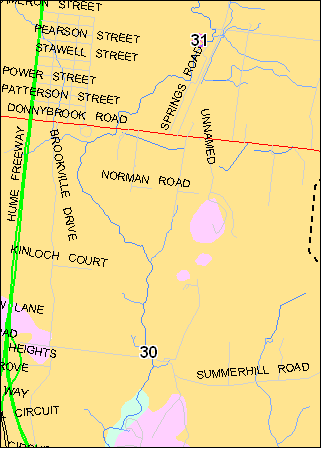 SITE DESCRIPTION: A pile of largo angular basalt blocks forms a steep rocky slope and partly fills a pool on an entrenched meander of Merri Creek. The pile is the result of a major rock fall on an undercut rock slope. The cliff at the head of the fall has now degraded.

This is one of the larger rock falls noted along the study area. It illustrates the process by which cliff failure causes the valley to eventually widen and the major mechanism by which large blocks and boulders move into the stream channel. There are, rock falls of similar dimension further south in the catchment but most are overgrown and not as visible as this site.

CLASS 3. The site is stable and not liable to further sudden movement. The large blocks should be left in situ to retain the context of the site. This site forms a clear contrast with the valley slopes in Silurian rocks 500 m downstream at the edge of Summer Hill.