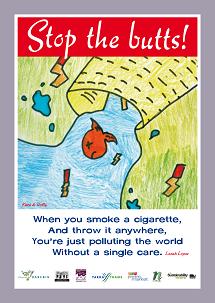 MCMC extended the state government’s “Bin Your Butt” message to non-English speaking background groups. The project helped raise awareness about the problems associated with littering and to reduce the number of fines received by people of non-English speaking background for littering. The project was funded by Sustainability Victoria and was a partnership between MCMC, Darebin City Council, Preston Market, Darebin Ethnic Communities Council and the Northern Region Waste Management Group. The project produced educational materials to be used in English language classes, received coverage in the ethnic media and local press. A poster competition was conducted amongst schools in the Preston Market communicating the litter reduction message and one poster was selected for display in two routes of Yarra Trams.