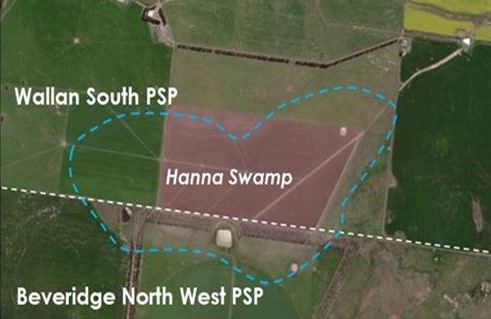 MCMC is delighted that the October 2020 Planning Panel Panel Report for the Beveridge North West Precinct Structure Plan (PSP) has recognised the importance of Hanna Swamp. Hanna Swamp straddles two large areas proposed for urban development (PSPs). It is part of the Strathaird/Taylors Creek system, a north-west tributary of Merri Creek near Wallan.

Although the future of Hanna Swamp as a restored wetland is not secured, support from the Panel is a helpful step forward to realising this vision. This reasoning is explored in more detail in a recent Nature Glenelg Trust blog.

A crucial factor in gaining the Panel's support for Hanna Swamp was a presentation made by Mark Bachmann of the Nature Glenelg Trust on behalf of Friends of Merri Creek.  The Friends also successfully argued that biodiversity and regional park planning should be acknowledged in the PSP.

MCMC’s submission focussed on the challenge of a managing the highly sodic soils that are widespread across the PSP. We argued that a precautionary approach should be taken, the soils investigated in more detail, and a revised urban structure for the PSP developed in response to the soils information. Although the Panel did not accept our argument, it accepted that sodic soils pose challenges and need specific management. They endorsed a key proposal from the Victorian Planning Authority (VPA) that requires Sodic & Dispersive Soils Management Plans for the subdivision stages in the PSP.

There is still much needed to ensure that robust plans are developed, that appropriate guidance documents are available, and that councils have the resources needed to rigorously assess and enforce the plans.

The Panel also supported the need to review Melbourne Water’s Kalkallo Creek 'Developer Services Scheme’ (DSS) in light of the widespread presence of sodic soils. The lessons of waterway failure at nearby Mickleham where sodic soils were not taken into account are clear to see. A DSS is document that sets out the drainage and waterway requirements for a particular sub-catchment under development and the apportioning of costs. MCMC has been calling for this DSS review for over a year. Melbourne Water has confirmed that MCMC will be consulted during the review of the Kalkallo Creek DSS in 2021.