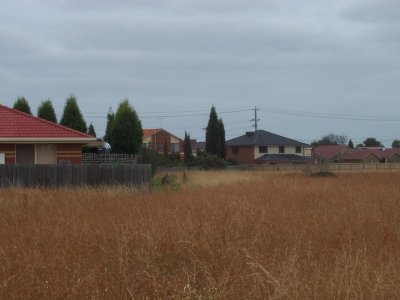 This 9ha grassland is located along Central Creek, a tributary of Merri Creek, in Reservoir, Victoria and it officially has the Wurundjeri name Ngarri-djarrang, meaning "Thigh." (It is one of four grassland sites along Merri Creek that together form a proposed Parks Victoria park to be called Marran Baba, or "body of the mother.")

112 indigenous species have been identified on the site, including nationally significant Short-fruit Water Starwort, Callitriche brachycarpa and Matted Flax-lily, Dianella amoena and State significant Rye Beetle-grass, Tripogon lolliformis. Short Sword-sedge, Lepidosperma curtisae on the site is believed to be of State significance (Robinson and Morgan 1997).

This site includes Merri Creek from the south to the north end of McBryde St Fawkner, including the 4 ha Bababi Djinanang (meaning "Mother's Foot") grassland on Crown Land on the west side of Merri Creek, adjacent to the end of Jukes Rd Fawkner. (This was formerly known as Jukes Rd grassland and is one of four grassland sites along Merri Creek that together form a proposed Parks Victoria park to be called Marran Baba, or "body of the mother.")

which has the largest known population in existence of the endangered Matted Flax-lily (Dianella amoena) (G. Carr, pers. comm.). In addition there are more than 60 other indigenous species present, including a number of lilies (Mueck 1997, B. Miles pers. comm.).

To the east of Bald Hill as far as Merriang Rd and south as far as Donnybrook Road is the nationally significant biosite Bald Hill[1].

The Bald Hill site has National significance for fauna on the basis of the presence of species such as the Grassland Earless Dragon seen by Beardsell in October 1988 along the Merri Creek escarpment[2]. There has only been the one sighting due to difficulties in finding the species. The suitability of habitat along both sides of the creek for the Grassland Earless Dragon has been remarked upon in all reports.

This site covers both sides of the Creek from Barry Road south to Horne Street. The Wurundjeri name means "stream waterhole" and it is a biosite of State Significance[1]
The City of Hume owns land on the west side of Merri Creek at the Hatty Court and Bambury Court Reserves. Apart from the Hume Freeway Reservation owned by VicRoads, the most significant parcel of land is the 93 hectare Melbourne Water retarding basin site which extends from just north of Barry Road to downstream of Horne Street and includes land on both sides of the stream. This land was purchased in the 1970s to permit retardation of flood waters. The area is now known as Galada Tamboore from the Aboriginal name meaning creek waterhole.
Perhaps the most outstanding feature of the area is its geology and geomorphology with the Barry Road or Merri Gorge having been assessed as being State significant[2]. Rosengren describes the site as having cliffs, alluvial and bedrock terraces and minor floodplains. The major geological and geomorphological feature is the 15 metre high cliff on the west bank. This cliff exposes an unconformity between the bedrock of Silurian sedimentary rocks and the Newer Volcanic basalts.

From Craigieburn East Road south to Cooper Street, the land surrounding Merri Creek and incorporating the Craigieburn Grassland comprises a biosite of National significance[1].
The Craigieburn grassland covers an area of approximately 400 hectares between Craigieburn Road East and Cooper Street, although parts of the area have little or no significance including a quarry, house and improved pasture[2]. The Craigieburn grassland has six key vegetation communities ranging from Plains Grassland to Danthonia Grassland and Stony Knoll Grassland[3]. The site has been assigned National significance for flora[4] due mainly to the presence of Carex tasmanica, Dianella amoena and Amphibromus pithogastris.
The Craigieburn habitat of Amphibromus pithogastris is likely to be critical habitat. This is also likely to be the case for Carex tasmanica[5]. There are 10 State significant plant taxa and 114 regionally significant taxa at Craigieburn[6].
The Craigieburn Grassland has also been assigned National significance for fauna due to presence of Striped Legless Lizard and Plains-wanderer[7], . It also has three State significant species (Black Falcon, Red-Chested Button-quail and Freshwater Blackfish), as well as 27 regionally significant species[8]. In relation to the Grassland Earless Dragon while it has not been recorded at the Craigieburn site, it may occur there, as relatively large areas of apparently suitable habitat are available. These include the bases of Stony Knolls, especially near the top of the Merri Creek escarpment. Given the extent of potentially suitable habitat, the site could prove to be one of the most important sites for this species in Victoria[9].
The critically endangered Golden Sun Moth (Synemon plana) was rediscovered in Craigieburn Grasslands in December 2003.
Merri Creek provides a key element of the Craigieburn site and the riparian and escarpment vegetation are of high quality. The creek corridor forms an important habitat link with sites such as Cooper Street to the south and Bald Hill to the north and is an especially important link for ground mammals. According to Beardsell, “the presence of the locally rare Common Wombat and Black Wallaby (not known from closer in along Merri Creek), suggests it acts as a faunal corridor”[10] as pivotal to strategic habitat links between the Merri and Plenty systems[11].. He identified the Craigieburn Grassland
The Merri Creek through this reach contains fast-flowing riffle sections of basalt cobbles and tessellated pavement, slow-flowing open water, reedy pools and a shallow gorge with columnar basalt cliffs and boulder screes and escarpments[12]. Future management of the stream frontage will need to take account of these values.
Beardsell described the Craigieburn Grassland and O’Herns Road Wetland as “the most extensive, intact, rare, diverse and significant volcanic plains rocky grassland, stream and wetland flora and fauna assemblage in Greater Melbourne. No biological reserve containing both of these systems is in existence”[13].
The Victorian Government purchased the bulk of the site in the late 1990’s and hearings into the Craigieburn Bypass eventually led to its construction mostly to the east of the grassland. Unfortunately freeway planning failed to provide satisfactory provision for habitat linkages to the north and east, so the potential for movements along these corridors for ground dwelling animals has been severely curtailed.
Issues relating to management of the site include:
· Control of weeds especially stipoid weeds,

· Biomass reduction by grazing needs to be managed to enhance the range of grassland values, including rare plants, stony knolls and riparian verges.